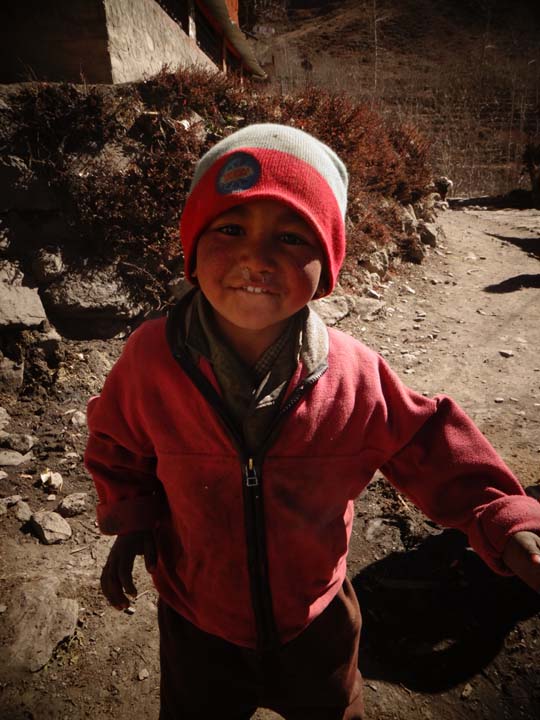 Being completely absorbed in a majestic, large-scale natural environments for days on end can render man-made divides as petty in the grader picture. One gets this sense from travelling through the Annapurna region of the Nepalese Himalayas. The inspiring landscape of the Himalayas is well-documented, but what requires closer investigation is the diversity and multi-culturalism present among the towns scattered through the mountains and along the rivers. “I am Hindu, yes,” says 23-year-old Gesin Kesan from Besisahar, a small town at the beginning of the Annapurna Circuit, who comes to work here during the trekking season. “People here are Buddhist. Everywhere.”

It had already been ten days of passing through countless villages before I met Kesan.  This is definitely Buddhist land: The path is wound with prayer wheels, the wind whips prayer flags about, and Gompas Stupas (Buddhist temple structures) are always at least within squinting distance.

Jo Gurung works for the Annapurna Conservation Area Project in Manang, and explained a bit about Buddhist rituals and structures. “Prayer flags send good fortune to the world [by wind]. Color represents an element, and together, harmony.”

There are five element/color combinations: blue, sky; white, air; red, fire; green, water; and yellow, earth. New flags are placed over old ones, which is supposed to renew the cycle of life, and the acceptance of change. Speaking about the Buddhist structures in the circuit, Gurung explains that the “place for praying is Gompa. Stupa is like a monument.”

A Gompa is a place for study or meditation, a monastery that houses paintings and sculptures of Buddha and where offerings are made. Larger Stupas can house relics, but they can also be built by individuals to commemorate Buddhist teachings for the community. Gurung acknowledges the motive behind building them: “People make a Stupa and have very good fortune.” 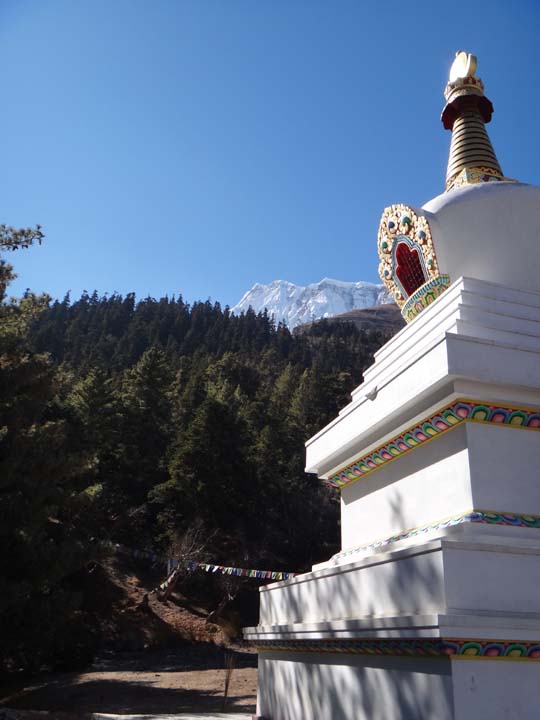 If fortune is not manifested in this life, the belief is that it will for the rebirth. “We spin prayer wheels for good karma,” explains Gurung.  “It’s same like saying a prayer in words.” As the name suggests, prayers are written on prayer wheels. They are usually found around Gompas within the town, or on prayer walls on the outskirts. By walking clockwise around the structure, believers as well as trekkers spin the wheels gently, releasing bad karma and actively gaining merit. It’s a simple and effectively addictive ritual.

Despite observing all the Buddhist relics along the trek, I chanced to be around for a Hindu festival in Manang that many were celebrating. “You saw Diwali, Hindu celebration for light,” Kesan informs me. It was mid-November when I reached Manang. “Young people in groups sing. Go to homes and sing for people. They make money like this for Diwali.”

Groups of young people went door-to-door singing their songs to make a couple hundred rupees. I was told by a guesthouse owner that some groups in Kathmandu will take Diwali very seriously and practice for weeks ahead of the celebration. Then they tour the luxurious neighbourhoods. I was surprised to see a Hindu festival in Buddhist country, but then Gurung explains: “ The Upper Manang is Buddhist, and the Lower Manang is mixed, Hindu and Buddhist.” 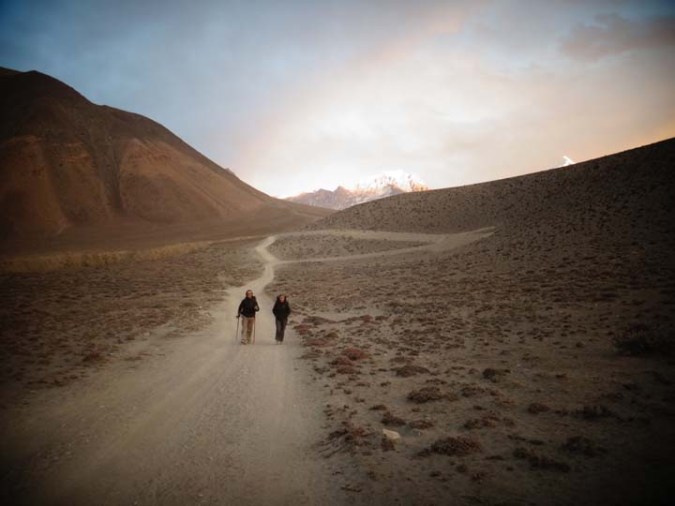 Trekking out of Upper Manang and crossing Thorung La pass brings with it not just a dryer landscape, but a different demographic. Not far to the north is Nepal’s last kingdom of Upper Mustang which boarders China-occupied Tibet. It is a traditional trading route that has turned into highly restricted area. A tourism permit runs at US$50 a day. It also means that many Tibetans have settled close by. Outside of Marpha, which is a few kilometres south of the main airstrip in Jomson, there is a Tibetan refugee camp called Chairo. A week earlier I had met Karma Tsawant trekking in Talicho Lake), and caught up with him at his Tibetan craft shop in Marpha.

“I grew up in Marpha, but I was born in Pokhara,” Tsawant says with a smile. “My parents live in the Tibetan camp in Chairo. They were born in Tibet. My father left when the Dali Lama left. My parents met here in Nepal. I have two brothers and one sister. I’m the oldest.” I wondered about the difference, if any, between the Buddhist practices of the Tibetans and the Nepalese.

“Buddhism…” Tsawant reluctantly begins, “I’m not a big religious person. We have some full moon holiday where we practice our Buddhism at a monastery on special occasions, not all the time. In the mornings we do small practice. “It’s not that different compared to Nepali Buddhism. Tibetan Buddhism is like family Buddhism from many years [passed on through descendents],

Nepali Buddhism is a bit more mix with Hinduism. Not so much mix but layers.” “Prayer wheels, Gompas, it’s all the same,” Tsawant admits. But Tibetan Buddhism has some prominence. “All Buddhism is written in Tibetan,” he says. “The Nepalese also write in Tibetan for Buddhism.” “In Tiri there is a very nice, very old monastery,” Tsawant tells me.

Luckily, I had already visited it and spoke with the Venerable Tsampa Nyima Dukta Lama who runs the monastery. His English was very limited, but he offered some insights. “This monastery, 860 AD. Tibetan Mahayana Buddhism, in Mustang biggest school.”

Dukta goes on to tell me about the family Buddhism Tsawant was referring to earlier. “Father 91 years old. Still at monastery. I have three sons. One at Darjeeling College.” (Where Dukta also studied). “[Another son] paints Kathmandu Buddhist things.”

The monastery sits on a cliff above the town of Tiri, known for their donkey breeding. To the left the Mustang valley stretches north to Tibet. To the right, the valley begins to descend south into the apple orchards of Marpha and into the vibrant green and lush lands of Tatopani. The way of life here goes on as it has, only impeded by the seasons not running its scheduled course. This fact is much more impressive considering the area is uninterrupted by technology or political strife.

Dukta still practices traditional Tibetan medicine. “Medicine make in powder, into dust. Bitter taste. No medical checks. Medicine only if sick. If you’re ill, sick, pain in stomach.” No check up for me as my health was fine, but it’s not uncommon for trekkers to get a diagnosis here. Dukta then pulled out a large color volume. “Medicine books in Tibetan, Chinese, and English.” It catalogues all the plants, many found all over Asia. Back then it may have been easier to trade and obtain these plants, but with the present situation in Tibet it seems to have restricted that ease of movement. 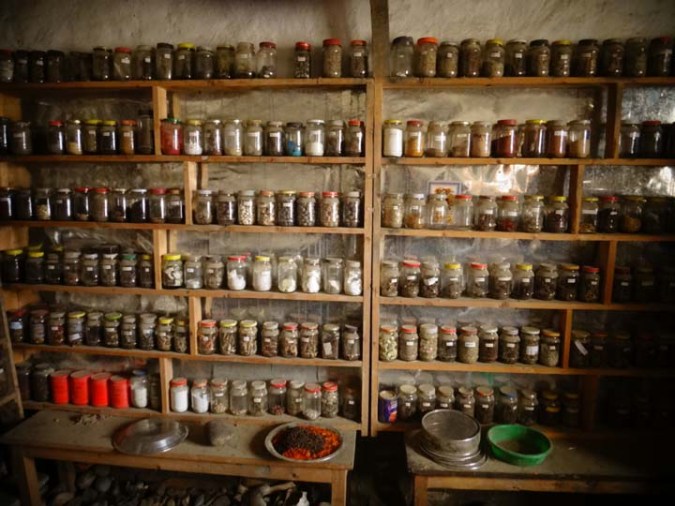 Back in Marpha, with Tsawant, we discuss Tibetans who travel to Nepal now compared to years past. “Now they let us come to Nepal, but don’t give us papers for here. Before, they would give us a refugee card so I can apply to other countries [for refugee status].”

Once a sanctuary, fewer Tibetans are now granted entrance into Nepal each year. Tsawant still has family in Tibet. He has never met them, but they have spoken on the phone: “They want to stay in Tibet. If they come here they might not be able to come back.”

Tsawant wants to meet his family, and to step on his land that is not too far away from where we stand now. It seems like it is just beyond the mountains.

“I will go to Tibet and meet my family. This is my aim, good success. If I go now I would go to prison. I don’t have a passport. I have to disguise my aim. If I get a Nepal passport it’s not strong enough politically. This is what my father wants. Get western passport from strong country, easy and safe, and if there is problem they would talk to embassy from strong country. If Nepal passport it would be problem.”

Tsawant hints on a topic that I would only discover upon research later on: the harsher treatment of Tibetans in Nepal. Since 1998, a generation cannot even exit according to Nepalese bureaucracy, as they stopped issuing refugee cards which makes it difficult to immerse into society. Maybe that’s why Chairo, a small mountain village, is expanding.

Looking back up at the mountains, I realized that though they look unchanged, the Himalayas are growing every day. Just like the people that live here in Nepal. These cultures have interacted peacefully for centuries; are they only now growing apart?