It’s fitting to begin where it all begun: Agnone, in Molise province of Italia, the home of not just my grandparents, but my extended family before they immigrated to Montreal in the 1950’s. Walking these streets I feel like a child again going to the park in Ville LaSalle. Not that the towns have any resemblance, but it’s all these faces I have seen before. The wrinkles of an old lady are the same as my Nonna, another one’s sleeveless house dress, blue with a pattern of little yellow flowers, with a white t-shirt underneath, I saw the same one growing up in the garden. 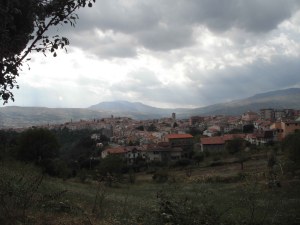 So, needless to say, I have a level of familiarity with the people here. Language plays an important role, though I am far from fluent in Italian. Having been exposed to the Agnonese dialect I understand these people better than their Northern countrymen. It helps to speak a language, but when you are versed in their slang doors open up, and they no longer treat you as an outsider, or a tourist, but a distant relative coming home again.