“The jeep road to Manang is no good for trekkers and no good for locals – no good for no one!” proclaims an exasperated Purna Gurung. He recently opened a guesthouse in Chame, Nepal, along the world’s most famous trek: the Annapurna Circuit. He blames the newly-built road as the source of his business struggles.

“I don’t know why they built the road, or who it benefits. The government decides, and that’s all.”

For many years, tourists (up to a hundred thousand annually) have travelled to the Annapurna conservation area to visit a region rich in culture and beauty. They can trek through the countless small villages scattered in the mountains, which boast several 8000m+ peaks.

But those numbers have been rapidly declining ever since the Nepalese government began a project to connect every district headquarter by a road.

The easiest place for engineers to build the road was right on top of the trekker’s route. So that’s exactly what they did. Unfortunately, many people feel that the project was completed without any apparent foresight of how it may affect the flow of tourists in an area whose economy is highly dependent on tourism.

Traditionally, trekkers take the route counter clockwise around the Annapurna mountain range. If Nepal’s second largest city, Pokhara (820m), is the starting point, trekkers take a bus to Besi Sahar (760m) to begin the trek on the Manang side. The route slowly ascends over several days passing through Manang (3480m) to reach High Camp (4850m) where in the early morning the next day trekkers reach the peak of their ascent crossing Thorong La (5416m), and then begin their descent to Muktinath (3800m) and the Jomsom side. 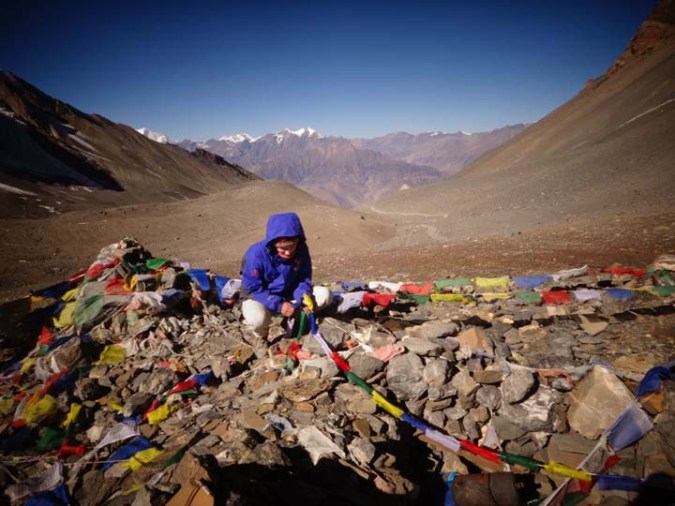 The descent to Jomsom (2720m) is rapid and trekkers have more options of where to descend finally before reaching back to Pokhara. Usually by Nayapul (1070m) via Ghorepani (2860m), with its exceptional sunrise viewpoint from Poon Hill where trekkers say goodbye to the mountains in which have been submersed for three weeks.

Santa Lama lives in Danakyu on the Manag side, and operates a guesthouse (all guesthouses are also restaurants). He sells fried bread rings by the side of the road.

“I’ve been making these [fried bread rings] for ten years now. I make for locals, and trekkers, everyone. The road, yeah, from other towns they know we sell here.”

It appears that the road is helping his business as some jeeps stop to buy his products fresh in the morning.

He goes on, however, to claim that the benefits to his business are not great. “Very few people trekking, walking. More jeep now, no good. Fewer people stay in Danakyu, go straight to Chame.”

Lama’s words echo the dependency people have on tourists. Lama can not only charge higher prices to foreigners, but if they were trekking instead of taking a jeep through, they could stay in his guesthouse and he could accommodate them with dinner and breakfast.

As the trekkers are turning away from Annapurna, or are zipping through on the express route the jeep road provides, Lama has lost much of his tourism business and has only gained a small local market for his fried bread rings. While one trekker could spend approximately 500 Nepal Rupees ($5.75 USD) on a typical dal bhat dinner, a breakfast, and one night’s accommodation, he only makes 100 Nepal Rupees ($1.15US) for a batch of five fried bread rings, which he sells to the jeep passengers or locals.

Even in Chame where Purna Gurung has his guesthouse, trekkers are not staying as long as they used to because of the jeep transport.

“Two years ago I built this guesthouse. I use to have land and a garden, but now just guesthouse for tourists. Not too many stay.”

And on top of that, the high trekking season is split between October to November, and March to May. “Not too many busy months. High season is already over by now [mid-November]. When it’s quiet I do nothing.”

The lack of trekkers staying in his guesthouse has an impact on Gurung’s personal life as well. “I can’t have children,” he says. “Not enough money. They are expensive and for now can’t have.”

In an unexpected turn, a government program designed to develop the region by means of a road is now damaging local development projects run by the Annapurna Conservation Area Project (ACAP).

Jo Gurung works for ACAP in Manang and explained their projects. “ACAP does many programs like alternative energy, safe drinking water stations, health, mother’s groups, and sustainable tourism. They work during the trekking season: summer time. Local people run it. Money for the trekking permits, and sometimes donor money, funds these projects.”

Essentially, if there are fewer trekkers paying for these permits at 2000 Nepal Rupees ($23.00 USD), there is less money to be distributed among these great projects designed and operated by local people.

When the tourism industry was booming with more trekkers every year, many farmers turned towards the service industry and neglected their agricultural fields. Jo Gurung shares a frightfully high figure, “70% of the fields are left alone because now the people work in hotel. It makes Manang even more dependent on tourists and trekkers.”

Now the few crops that are tended focus on a highly valued root harvested only in spring. “A special plant they grow here that is used in medicine and gives you energy,” explains Gurung. “It’s like a root, a fungus, and grows underground, called yarsagumba. This root and tourism is 90% of economy here.”

The ironic thing is that building the road was supposed to be a way to increase revenue for the agricultural industry.

Andrées de Ruiter, a Belgian man who has traveled extensively in Nepal and numerous times to Annapurna, wrote a free pdf guidebook on the circuit to help trekkers avoid the road.

He says the following about the road’s impact on the Jomsom side: “Most of the population in upper and lower Mustang was asking for the road, which is definitively easing their life and enhancing life standard.”

“The apple farmers are great profiteers as they get now about tenfold the former price. But also daily goods like rice, oil or beer are now much cheaper than before. An often told aspect is that people can be carried much easier to a hospital.”

Perhaps Manang will eventually turn their back on tourism and head to work the fields and reap the benefits of the road. Though the road helps locals working in agriculture on the Jomsom side, those dependent on tourism continue to suffer. 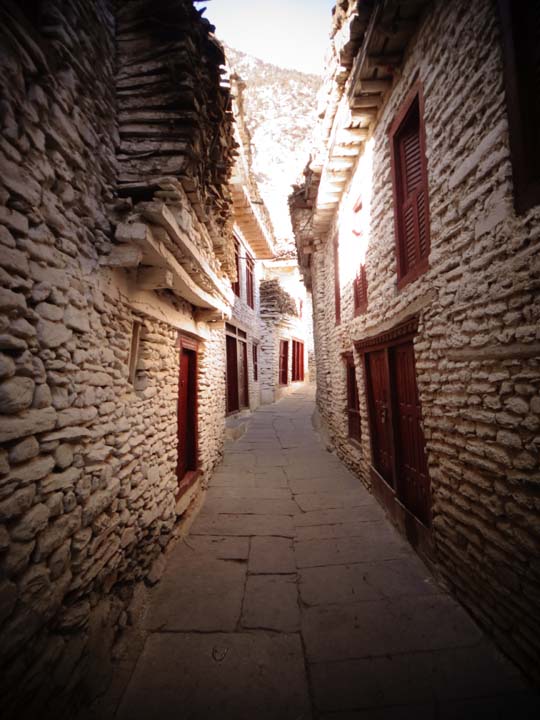 “Six years I have this Tibetan shop. It’s up and down. I don’t like this kind of business. I like more trekking, guiding, going place to place, and to have conversations and to communicate.”

Tsawant does not like to sit around waiting for business. It’s quite apparent as his normal cheerful demeanour, his contagious laughter has silenced. He goes on sombrely, “Now it’s quite few tourists. At least in Marpha it’s not too bad. People always go by bus. It doesn’t help. It’s a big problem for trekkers. When they go by the road there is a lot of dust and they can’t find the trekking trail.”

Though people use the bus to reach Marpha, or to sometimes end their trek, the damage the road has on his business outweighs the positive effects.

“There are people that come in by bus, so more tourists. But before the road there were more trekkers. It’s not good for people who do business with trekking. [The road is] only two and half years old, and less trekkers, less people. They always complain about the dust. It’s not very good.”

“They have trekking trails but they always end up touching the road. If you don’t touch or see the road it would be much better. ”

Jo Gurung agrees, “I think fewer trekkers come. Trekkers like to walk on trail not road. The trekkers go somewhere else. They change places.”

“I don’t know why they build the road. I don’t want the road. Here is mountain area with many tourists coming. These people here don’t like the road, I don’t want it. If you want to come by car it brings pollution.”

Before, Manang was one of the towns trekkers would spend a few days in as it was a naturally situated resting spot at an altitude prime for acclimatization.

As Purna Gurung said about Chame, Jo Gurung now says about Manang, “Tourists coming take one day, stay here one night. Looking around, getting into car and go. They come, they see, but don’t leave their business.”

However, de Ruiter somewhat contradicts Jo Gurung when he explains that the road on the Manang side was supported by Manang proprietors, at least initially. “The hotel owners of Manang saw a big opportunity with the road, but which will probably destroy the lodges below Chame.”

Throughout my 23-day trek around the Annapurna circuit, I would frequently hear locals complain that they do not know why the road was commissioned. However, due to the language barrier, most local people I spoke with worked in the tourism industry, hence their language skills.

There are indeed locals that support the project, as de Ruiter explains: “There was also strong demand from the locals, not depending trekkers.”

And when I asked Karma Tsawant who benefits most off the road, he knew exactly who. “It’s good for people who own buses, tractors, trucks, who have business with fruit, anything with transportation.”

Jo Gurung still sees very few positives. “It brings supplies; some of it is a little bit cheaper. If you come by jeep it brings pollution. More bad than good.”

Karma Tsawant also focuses on the negatives when it comes to transportation, “For locals, transportation is much more expensive when you are using jeeps in comparison with mules.”

Jo Gurung breaks down a possible transportation scenario for locals: “Three to four days trekking from Manang down to Besi Sahar [where you can connect with major roads]. If you want to walk with local people, maybe 500 rupees ($5.75 USD), three days 1500 ($17.25 USD).

Once the road from Chame to Manang is completed those prices could become more affordable, and potentially the trip could be made within a day.

Jo Gurung isn’t sure how long that might take. “Now they are blasting the road. It takes long time. But now they’ll have to make an alternative trekking route.”

And perhaps that has been the solution all along: more trails. There are new trails avoiding the jeep roads which de Ruiter dubbed New Annapurna Trekking Trail (NATT), which can help the Annapurna circuit bounce back from the negative impact the roads have made.

The value de Ruiter has for Annapurna is high – “I think it is unique in its cultural diversity and the great mountain sceneries,” and he is optimistic that it will recover.

“The transition is surely difficult as ACAP reacted too late with new trails. I see Annapurna region going from a single trekking tour to a trekking area with a grid of different possibilities like in the Alps. As soon as the new alterative trails are fully complete it will be as nice as before.”

4 thoughts on “Jeep Trekking: The Consequences of a Road on the Annapurna Circuit (Nepal)”