The perfect symmetry of the yellow stoned arches mirrored in Balikligöl pond only lasts a second. It is broken by the chaotic splashing of a few holy fish crowd surfing over the thousands more with mouths babbling ready for the feeding frenzy. They’re here because of a legend dating back millennia.

Sitting in the shade of a large tree outside the Cave of Ibrahim, I watch my hot çay tea sweat in the agonizing heat that is summer in Şanlıurfa. Reflecting on the historic significance of what I just witnessed is feverishly difficult. This is the cave where Abraham, the very same Abraham from the Old Testament, was born. 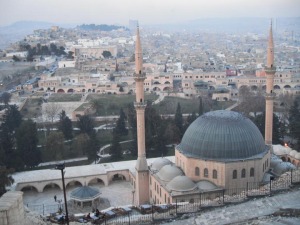 This precise cave that, only a few minutes prior, I was nose up against the plexi-glass sealing it off from visitors in hope for a better look. What I saw was nothing impressive, a little bit of a stream trickling down the dark rock with no real details to grasp or befallen. It has no visual inspiration, but what it lacks in aesthetics is made up in the spiritual, apparently. 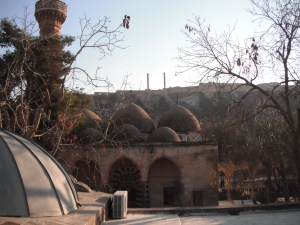 How to know when you are stuck on the periphery of culture? The outside layers are beautiful and inspiring. There are marvellous mosques surrounding the area. There’s a citadel on top of the mountain the cave is carved into which has panoramic views that peer through the hazed heat wave and into the dusty distance beyond. But there’s something not readily accessible for a traveller like me to understand about the interior, the spiritual resolve.

It’s the same as when I was admiring the goods in the bazaar, the earth-toned rainbow of spices, the alluring fragrances of oils and perfumes, and a man crafting blankets from a traditional wooden weaver as if nothing has changed in five hundred years; it all distracts me as I twist and turn into disorientation and fumble out lost on a quiet back street.

Sometimes there are signs, other times by asking directions you can be well on your way again. Discussing the cave’s significance with locals was the best I could hope for clarity. And since I was being sheltered in an elderly Kurdish couple’s guesthouse, perhaps they could enlighten me.

Aslan, the head of the family, had invited me for an authentic dinner at their first son’s home. We drove in their Volkswagen up windy, steep streets into a residential neighbourhood. Being warmly greeted with big smile from Aslan’s son, and shy eyes from his grandchildren, I was led into the living room. All along the baby-blue wall to wall carpeted floor laid pillows of intricate geometric patterns filled with vibrant colors.

The son had six children of his own, two of them girls. They, with their mother, served  boiled chicken with a mountain of rice stuffed in vine leaves, and then stayed behind in the kitchen with Aslan’s wife. With the men and boys I ate the tasteless chicken, and the sour and stale vine leaves. I tried to escape dinner with relentless questions about Urfa. But they weren’t interested in my biblical questions and ancient history.

“We are Muslims,” Aslan told me, “But first we are Kurds.” Aslan and his son explained to me the atrocities they and their people have suffered under Turkish forces, while the four boys nodded obediently. They lamented the broken promises of Anglos, and sympathised with their infidel brothers from Armenia. Behind the lustre of this old Middle Eastern town there’s a battle raging.

Aslan flicks the switch of the television and proceeds from flipping between two Kurdish channels, one news, the other music videos. Indeed, there is a war going on. The pop-rapper is in full camouflage holding an automatic rifle with a mountainous backdrop alluding to both guerrilla tactics and the nomadic roots of the Kurdish. The news anchor is showing clips of a demonstration in Diyarbaki which could be from yesterday, or simply a montage collected over the years.

The propaganda was too intense and intimidating after two hours. As I saw Aslan was only beginning to settle in, I thanked my hosts and excused myself. Aslan assured me the way back, and the desire to be out of this cranked up atmosphere gave me a false sense of confidence for my journey back to the guesthouse.

Instantly, I was alone, a foreigner without the security blanket that being a guest bestows, in the calm cobble streets under a brightly lit streetlamp. Voices resided in the shadows, grouped together and I felt their eyes as I lurked my way through with a brisk, but not overly eager pace. Tension like a guitar string being highly strung out of tune was in the air: it could snap at any instant. I felt compassion for the Kurds, and betrayed by the Turkish whom had treated me with such kindness in my two weeks travelling their rich lands. But hearing the taunts directed towards me on my way down to the old center, I was scared that these Kurds didn’t know my sympathy.